Skip to main content
-A A +A
Story by Miyun / Photos by H.S. Seow and Miyun

In conjunction with the Ullambana Festival (Seventh Lunar Month) Than Hsiang Temple organized a ten-day Filial Piety Dharma Assembly from 17 to 26 August 2012. There were lamp-lighting prayers (blessing for living parents and relatives) and penitent services (remembrance of departed parents and relatives, ancestors, karmic creditors and all sentient beings) during the period.

The distinguishing feature of the Dharma Assembly this year is its inaugural application of digital tablets. Besides, for the first time at Than Hsiang Temple the duration of the event extended over 10 days so as to allow ample time for public participation. The merits accrued will be transferred to our living and departed parents, relatives and friends as well to the well being of our people, to world peace and to all sentient beings.

This year, more than 10,000 people registered for the penitent service for the deceased and more than 1,000 people did lamp-lighting.

According to Ven. Dr. P. Gnanarama:
“Meaning of Ullambana
Ullambana, popularly known as the Festival of the Hungry Ghosts, is celebrated by Buddhists and Taoists in China, Korea, Japan, Singapore and other countries. Following the Chinese Mahayana tradition, it falls on the fifteenth day of the seventh month of the lunar calendar. The festival evolved from a Mahayana sutra called "Ullambana Sutra", supposed to have been delivered by the Buddha with reference to the suffering mother of the second chief disciple, Maha Moggallana (Mu Lian). "Ullambana" is a Sanskrit term which means "hanging upside down". Hence, it is commented that she was in purgatory undergoing the torment of being hung upside down. The Pali equivalent of the term is "Ullampana" which means "merciful disposition". Thus it depicts the sympathetic attitude to be cultivated towards the departed ones.

Significance of Ullambana
Ullambana can be considered as a purely Buddhist ceremony if the Buddhists devote themselves to remember their departed relatives and friends during the days prescribed for the ceremony by transferring merits to them for their well being. Noticeably, Ullambana focuses its attention to filial piety which Maha Moggallana exemplified by performing meritorious deeds in the name of his mother and other relatives. In the Theravada tradition, the transference of merits to the departed is practised among its followers. The well-known Tirokudda Sutta speaks of the departed ones who are waiting to enjoy the merits from the living relatives in order to improve their pathetic conditions. So much so, in the Sigalovada Sutta, it is pointed out that the duty of transferring merits to the parents and other relatives falls on the living members of the family. This is an act of loving-kindness (metta). The practice has grown with the passage of time and as such in different Theravada countries, Buddhists undertake to follow different religious functions to transfer merits to the departed so that they may be well and happy. The spirit of the custom is that while resorting to a religious practice, one acquires merits and then transfers them to the intended departed ones who expect merits from the living relatives and for their well being. So, in this way, the practice guides the living members to be moral and religious in their day to day dealings. As the transference of merits is also a meritorious act, both parties are benefited by this act.”

From August 18th to 25th, a session of Transference of Merits was held at the Multi Purpose Hall at 10.45 a.m. daily. Other activities during that period were the public participation in the chanting of Amitabha Sutra at 8 p.m. daily followed by Dharma talks by Sangha members on the following topics: "The Significance of Pureland Buddhism", "Amitabha Buddha and Pureland Buddhism", "The Purpose of Chanting Amitabha Buddha's Name" and "Samantabhadra Bodhisattva's Ten Great Vows". During the period, about 600 people attended the Dharma function in the evenings.

On Sunday, August 26th a full day Dharma Assembly was held at the Multi Purpose Hall on the fifth floor. It started off with Buddha Name Recitation from 9 a.m. to 11.00 a.m. followed by the Grand Offering to the Buddha. More than 500 people attended the function in the morning. After lunch break the Three-Session Pure Land Chanting began at 1.00 p.m. The Multi Purpose Hall was packed with more than 1,000 people in this auspicious event which had lasted 5 hours.

◆Grand Offering to the Buddha，11 a.m. 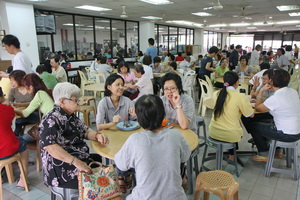 A big thank you to Sangha members, staff members, volunteers, participants and supporters of Than Hsiang Temple for having made this event a success!

May you be well and blissful!